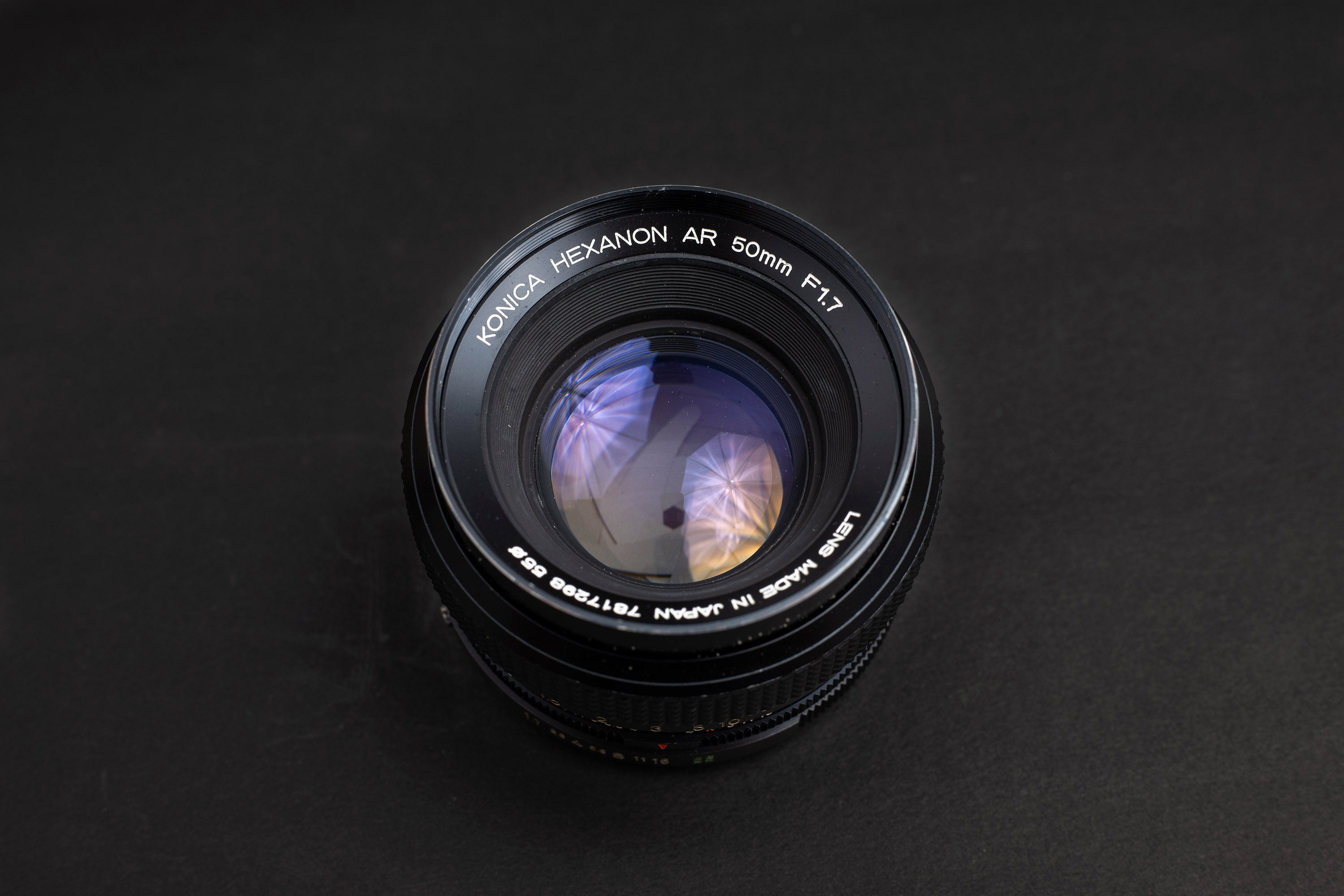 Konica Hexanon 50mm f1.7 is the entry-level standard lens in the Hexanon lineup, along with a faster 50mm f1.4 and the iconic 57mm f1.2. All three lenses are great but have slightly different characteristics.

Although 50mm f1.7 is the slowest, it is the sharpest and an outright excellent performer, probably having the best price/performance ratio of all my tested lenses. There are cheaper lenses, and there are better lenses, but I doubt there are more affordable, better lenses. If there are, I want to know about them!

Konica Hexanons are not as popular as other vintage lenses because they were challenging to adapt before the onset of mirrorless cameras. Flange distance of the lenses was shorter than that of most DSLR cameras, prohibiting easy adapters. Mirrorless cameras, such as Canon EOS R which I am using, allow easy adapting of the Konica AR Hexanon lenses without complicated adapters.

Konica Hexanon AR 50mm f1.7 is a beautiful, sturdy, well-built lens. Earlier models feature a full metal and glass construction, later models having a rubber focus ring. The focus is smooth, accurate and easy to use, but could be a little more damped. Nonetheless, focussing is straightforward and gives predictable results. Focus peaking on EOS R works well with this lens.

Aperture control is not as refined or smooth like on other vintage lenses. It feels similar to Pentacon and the late Zeiss Jena where the aperture is clicky, tactile and easy to adjust. Aperture has six blades – not enough for round highlights when stopped down. Hexagon shapes are visible in the out of focus areas, which can be distracting, depending on the subject.

Flange distance is a distance between the lens mount and the sensor, a crucial metric when adapting vintage lenses. The camera’s flange distance has to be shorter than that of the lens to provide space for the adapter.

Otherwise, adapters have optical elements or the lens is unable to focus to infinity. Cheap adapters impact image quality, while good ones impact the wallet. For the above reason, adapters with optical components are undesirable.

Canon EOS R can adapt all of the above mounts without optical adapters, while Canon EF SLRs cannot. SLRs also have issues with adapted lenses going too deep into the camera and obstructing the mirror, potentially damaging the camera.

I use a simple Fotasy Konica AR to EOS RF adapter that I bought from Amazon. The connection between the adapter and the lens is very sturdy -it fits like a glove, with no play or wobble between the lens and the camera.

Performance of the Konica Hexanon AR 50mm f1.7 is superb – the images are contrasty and sharp. Even wide-open the centre of the frame is sufficiently detailed for the great-looking portraits. Sharpness significantly improves when stopped down, and becomes adequate for most photos from about f2.8. Subject separation is excellent, and background blur (bokeh) is pleasing.

Vignetting is strong when wide-open but improves quickly at smaller apertures.

Shooting into the sun causes flaring with a (subjectively) beautiful bright blue flares. Blue cast sometimes covers significant portions of the image, allowing creative use of this lens to enhance the mood. Overall, I love the colour reproduction of the Hexanon 50mm f1.7, and it is one of the reasons I have used this lens for a long time, in various locations.

Images get a painting-like appearance in these wide-open shots of the forest.

Konica Hexanon lenses are not rare – there are plenty going around – but finding a good example can be challenging. I purchased a few Konica lenses with fungus and scratches, even when described as in good condition. They are not as coveted as Carl Zeiss, so I suspect people did not look after them.

Influenced by the adoption of mirrorless cameras, all Konica Hexanon lenses have started to increase in price. Konica Hexanons still offer tremendous performance for the price. I bought the 50mm f1.7 on eBay for 60 GBP / 70 EUR / 80 USD, but they used to sell for significantly less only a few years ago.

There are two versions of the Konica Hexanon 50mm f1.7 AR:

Optical properties and lens schematics are the same.

Konica Hexanon 50mm f1.7 AR is not radioactive. I routinely test lenses for radioactivity as part of my testing. Documenting lens radioactivity has become my hobby. Konica used thoriated glass in the top of the line Hexanon 57mm f1.2, which is slightly radioactive but omitted it from f1.4 or the f1.7 versions.

Konica Hexanon 50mm f1.7 AR is neither rare nor unusual – nonetheless, it punches above its weight where it matters – offering image quality for a fair price. Bluish flares can add a lot of character if used intentionally. This lens would equally suit a vintage lens enthusiast or someone just starting. Overall, this is an excellent lens, and I would rate it 5 out of 5.

What do you think about the Konica Hexanon 50mm f1.7? Does it match my findings? Let me know by sharing a comment below.