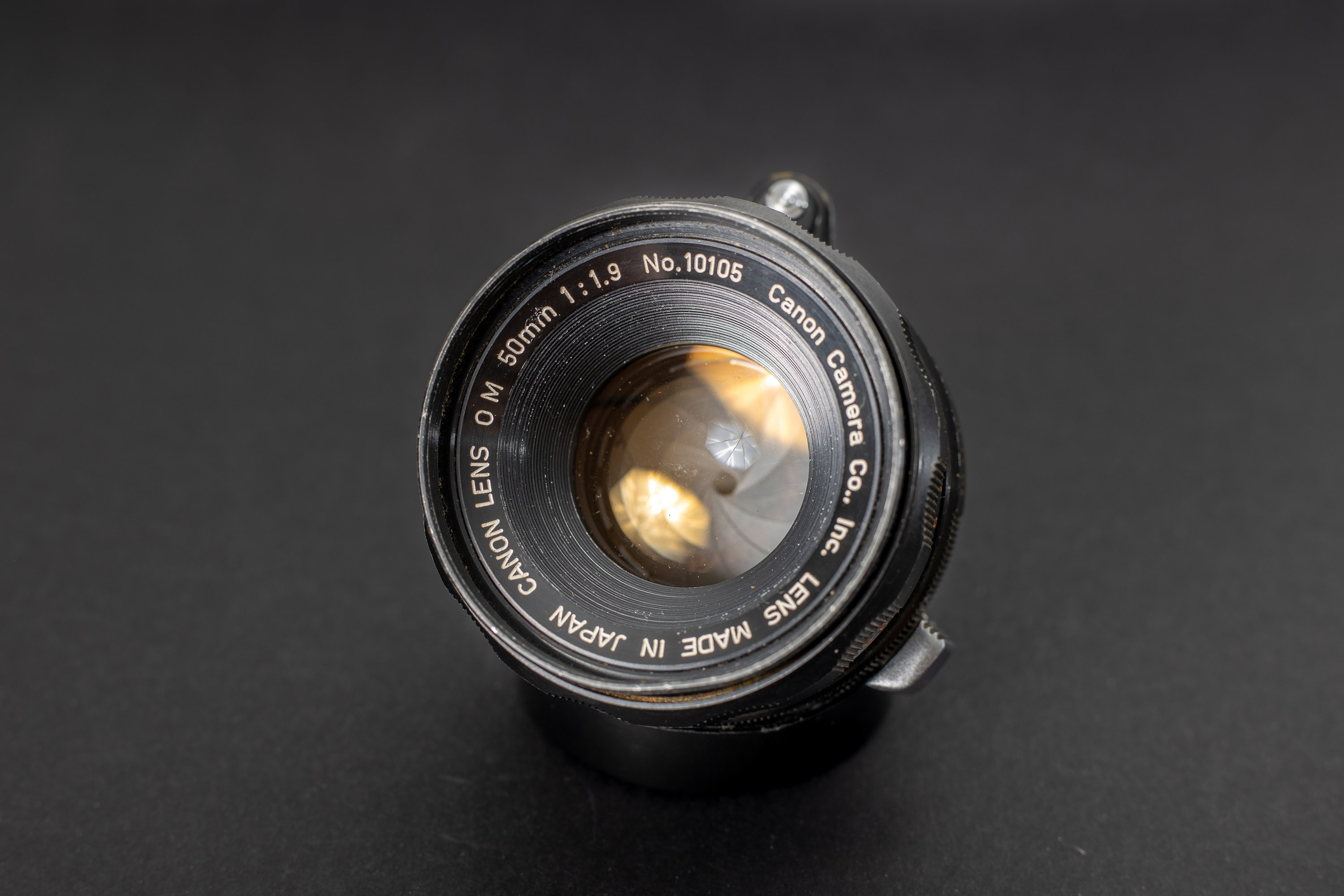 Canon OM 50mm f1.9 is an unusual, rare lens – created through a unique collaboration between Mamiya, Canon, and Osawa – resulting in a Canon lens for the Exakta mount sold only alongside a Mamiya 35mm SLR camera body.

Canon OM 50mm f1.9 is built like a tank. I have used this term before; however, it’s the best way to describe these early lenses – they are tough, made entirely out of glass and metal, and feel solid in hand. My example is full of dirt and scratches, and yet it still does its job well.  I believe lens construction plays a big part in the enjoyment of using vintage lenses; after all, only expensive lenses are made this way today. Most modern lenses are plastic, even expensive ones.

The focus ring on my copies is not as smooth or easy to turn, but that could be due to age. It reminds me of how the Canon FL lenses feel.

The aperture selection is a little clunky – you must pull the ring towards the camera and rotate it to change the aperture. Twelve aperture blades ensure round bokeh shapes. The auto diaphragm button closes the aperture – like the other Exakta lenses. Make sure you press it after changing the aperture settings to ensure the correct f-stop is set.

The glass is also uncommon – Canon OM 50mm f1.9 uses thoriated lens elements and is, therefore, radioactive. To be fair, this surprised me. When I first tested this lens, I did not expect radioactivity since it is an early slow lens – most other radioactive lenses are faster. Radioactivity could also explain the excellent performance – thoriated glass was used to improve the optical performance. I am not saying that all thoriated lenses are excellent, but the ones I have tested have been good so far.

I measured both of my copies (serial numbers 10105 and 11272), and they both showed about 38 µSv/h or 13000 CPM at the lens’s rear element using the GQ GMC-600+ Geiger counter. Remember that most of this is alpha particles that do not travel that far, so the µSv/h value is only relative. My article about Radioactive Lenses has all the details.

In the 1960s, J. Osawa & Company was a distributor for both Canon and Mamiya. At that time, Canon was a minority shareholder of Mamiya, and it appears both companies were collaborating. Mamiya made good camera bodies, but their lenses could not match Canon’s premium offerings. To give Mamiya Prismat NP an extra edge, Mamiya included the Canon OM 50mm f/1.9 lens as a premium lens option for the camera.

According to Bob Shell’s Canon Compendium, this Canon / Mamiya combination was not widely available outside Japan; however, Olden Cameras sold it in the USA for at least some time, as evidenced by the advertisement below. A rebranded Mamiya NP variant named Reflexa was also available in the UK market and came with the Canon OM 50mm f1.9 lens as standard.

Here is a rare combination of two great names in photography: MAMIYA – well-known for its excellent camera quality and CANON – world-renowned for the finest in lenses. Never before such optics and design in one camera at such an impossible low price – Olden Cameras New York advert.

The lens is good; however, it does not justify the $300+ prices sometimes seen online. The prices are inflated mainly because of the uniqueness and rarity. I purchased this on eBay for substantially lower because it came affixed to the beat-up Reflexa version of the Mamiya camera in the UK.

Canon OM 50mm f1.9 offers notable performance – especially considering it is one of the early Canon lenses. It is sufficiently sharp and contrasty when stopped down. Out-of-focus areas (bokeh) can seem a little too busy at times and display a little swirl, but it does not detract from the overall appeal of the resulting images – I like how this lens renders.

However, not all is rosy. Canon OM 50mm f1.9 has early lens design and coatings. Lack of contrast is evident when shooting into the light or wide open, and rainbow flares appear if the sun gets into the frame – all of which can contribute to setting the vintage photo-looking scenes, and in my view, is not a huge fault.

Performance, rarity, and exotic elements make Canon OM 50mm f1.9 a worthy addition to any vintage lens collection. It is not perfect, but considering its age it’s right there among other vintage lenses in character, build quality and usability.

I would give it a strong 4 out of 5. The only downside is the price, but that is not really an attribute of the lens, more so of the market.

Have you tried this lens? What do you think of it? Please leave a comment and let me know!