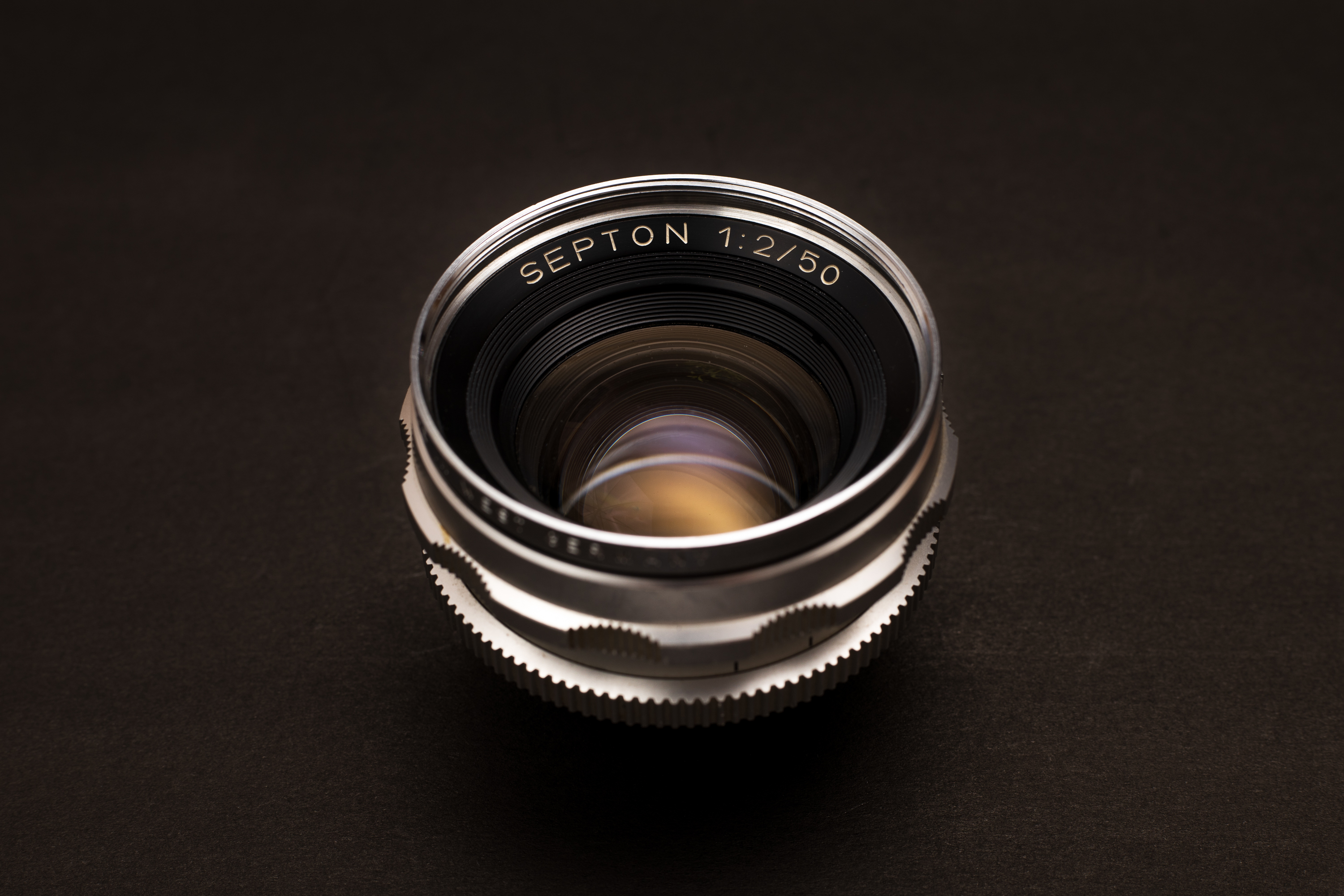 Voigtländer Septon 50mm f2 was top of the line lens for the Bessamatic cameras – introduced in 1959 and made until 1967. This lens competed with the best lenses from other German manufacturers like Carl Zeiss and the wave of Japanese imports coming into the market. It was exceptionally well made, utilised the best materials and lens calculations available at the time.

Voigtländer was founded in Vienna, Austria in 1756 by Johann Voigtländer. Throughout the years, Voigländer pioneered a lot of lens designs, including the well-known Nokton and Ultron amongst many others.

Carl Zeiss bought the majority stake in Voigtländer in 1956, although Voigtlander remained mostly independent. It competed with Zeiss until around 1970. Since then, the lines of cameras and lenses were harmonised, and Zeiss produced the camera bodies, while Voigtlander produced the lenses. Bessamatic range of cameras and lenses were the last of independent Voigtländer products.

Bessamatic was Voigtländer’s first 35mm SLR camera with interchangeable lenses. Looking at it today, it resembles a work of art, a technological marvel utilising the most expensive materials. However, it featured a complex leaf shutter which had a smallish aperture of only 20.5 mm – a design decision which resulted in lenses not being faster than f2.

The fastest lenses for Bessamatic was the Septon 50mm f2 reviewed here, and the Skopagon 40mm f2 – both using unique lens designs, necessitated by the small aperture size of the leaf shutter.

Septon is an unusual gauss type lens. Written historical details about this lens are almost non-existent. I found a few manuals and some brochures, but apart that – nothing. There was no patent – presumably because there was no need for one for the design derived from an already patented lens.

Information on the online forums regarding the originating design is conflicting – there are differing opinions on whether Septon is based on the Ultron 50mm f2 or a Nokton 50mm f1.5 – both earlier Albrecht Tronnier’s famous designs. I compared the lens diagrams from the patents of both, and to me, it seems that Septon is much more like the Nokton. Ultron just looks different and is six vs seven elements.

While no other lens was called Septon again or had an identical optical formula, a similar lens configuration was used for another iconic lens – Carl Zeiss Planar 80mm f2.8 (1957) for Hasselblad.

Are these two lenses related? It’s arguable. I was not able to confirm who designed the Carl Zeiss Planar 80mm, or which one was designed first. Planar 80mm f2 was released in 1957, and Septon in 1959 – planar came first. At the time Voigtlander was already owned by Zeiss, and even though the two entities were producing competing products, Zeiss could use Voigtlander’s technology and patents. It would be interesting to find a detailed chronology of these two lenses.

Mechanical build and materials are all top-notch – the barrel is finely machined from steel and focus ring is smooth and well-damped. There is no aperture ring, as the aperture is controlled via the camera (or the adapter). The whole physical appearance, quality of manufacture and attention to detail are all evident in every aspect of the lens. To me, build quality is as important as the resultant image quality – and this lens delivers.

Voigtlander Septon 50mm f2 suffers from the potential separation of glass elements. I found out the hard way – the first Septon I purchased had it.

Separation happens when lens groups split, opening air gaps in between the elements. Those air gaps don’t transmit light well, causing ghosting and reduced contrast. While a tiny amount around the edges of the lens is not even going to show up in the images, a more substantial separation is going to severely affect the image quality and value of the camera lens.

Sometimes the material holding the lens groups together dries up due to heat or storage. Manufacturing imperfections such as small dust particles present at the time of assembly can cause separation many years down the line.

There are no easy fixes for separation. There are a couple of options such as replacement of the separated lens group with a healthy one, or completely separating, cleaning, and recementing the group together. That is no straightforward task, as lenses are challenging to realign correctly again without special equipment.

Older lenses are generally more prone to it because of their age, materials used at the time, and the conditions they endured throughout their life. Modern lenses use improved cement which is unlikely to separate. Nevertheless, I still keep all lenses away from direct sunlight and don’t allow them to heat up unnecessarily. I am also more vigilant when buying older lenses, ensuring that not even the smallest amount of separation exists, as, with time, it will only get worse.

It is easy to tell when the lens has separation – colourful reflections appear inside the glass.

I did not detect any radiation above the background level. This lens does not contain any exotic radioactive glass with thorium and can be safely used. It may include Lanthanum glass, but radiation from it is so minute that my equipment can not detect it.

There are two versions of Voigtländer Septon. The first version was produced between 1959 and 1966 and had a minimum focus of 0.9 meters.

The later version was only offered towards the end of production between 1966 and 1967 and had a longer barrel and much shorter minimum focus distance of 60 cm. Yellow dot on one of the mount screws indicates that the lens is capable of automatic aperture control. Only 6858 of the V2 lenses were made. (Link)

Compatibility and the DKL to EOS R adapter

Voigtlander Septon uses the DKL (Deckel) mount of the Bessamatic / Ultramatic cameras. Kodak Retina cameras used the similar DKL mount, but the lenses are not interchangeable between the cameras. The Haoge adapter that I use allows both DKL variants to be used. It is also very well made and matches the style of the lenses.

The adapters are slightly more complicated because they have to include the aperture ring, which is not part of the lenses.

Both mirrorless and SLR cameras can use DKL lenses; however, on full-frame SLR cameras, DKL lenses can hit the mirror at infinity. Mirrorless cameras have no such issues.

Haoge also makes DKL end cap, made out of solid metal. I bought a few to protect the lenses.

Voigtländer Septon showcases German lens manufacturing skills. The images are vibrant, sharp, contrasty, and have a pleasing analogue look to them. The scenes are alive. Colours are beautiful, with subtle gradations. I do not have anything to complain about in terms of image quality. Yes – it does not have the smoothest bokeh of the f1.2’s or greatest flare resistance of modern coatings, but those are minor inconveniences with this very usable vintage lens.

Extension rings work very well too, so minimum focus distance can be lessened and magnification increased. The extension ring sample images show a lot of detail and high contrast.

Prone to lens separation
On the expensive side
Minimum focus distance

Voigtlander Septon has a lot of positives and a few negatives. It can’t compare to modern lenses with absolute sharpness or corrections – after all, it’s now over 50 years old. Yet to vintage lens lovers, this lens is the epitome of perfection. Voigtländer has put all its effort into the Bessamatic system, and it shows.

I would rate this lens 5 out of 5. Even the higher price is justifiable in the context of history and quality of this lens.

Did you like this review? Do you have something to add about this lens? Please leave a comment!